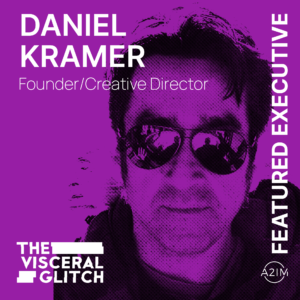 Welcome to A2IM’s Featured Executive column, where we highlight rising executives making moves and supporting the growth of the independent community. To submit yourself or a friend for a potential feature, fill out this form.

This week’s featured executive is Daniel Kramer, Founder & Creative Director of The Visceral Glitch, and creative director of The Control Room. He began his career at BBC Radio in London, creating music-oriented content for a variety of networks, including 6Music, 1Xtra, Radio 2, and The World Service. In 2005 he moved to Brooklyn, where he shifted gears from audio to motion design, crafting animated content for a range of clients from major brands (e.g, JPMC, Amazon Prime, Mike Bloomberg, etc.) to independent comic book artists. He has also art directed a variety of show packages for publishers, including Complex and Rolling Stone.

In 2018 he launched The Visceral Glitch, an Instagram page with a distinct aesthetic. The page caught the attention of Mark Stewart of the legendary band The Pop Group, who commissioned Daniel to create digital content to promote Mute’s reissue of their debut album.  After working with more music clients, Daniel launched The Visceral Glitch as a content studio. When COVID hit and shut down the live music industry, the studio partnered with A2IM to develop a livestream, UnderCover, that raised money for The Musicians Foundation.

After Season 1 finished, he joined forces with Stephen Tucker from Live Stream Remote and Larry Burnet from Herculean to form The Control Room; a first-of-its-kind full-service content and livestream studio dedicated to the music industry.  Their inaugural production was the Let’s Get Digital conference for A2IM. The Control Room is currently in development on pioneering music content projects, including art direction for the upcoming Caroyln Mass documentary and digital promos (e.g., Spotify Canvases, Instagram filters, etc.) for a diverse array of acts.

Learn more about A2IM here, and contact our team at [email protected] to join now.