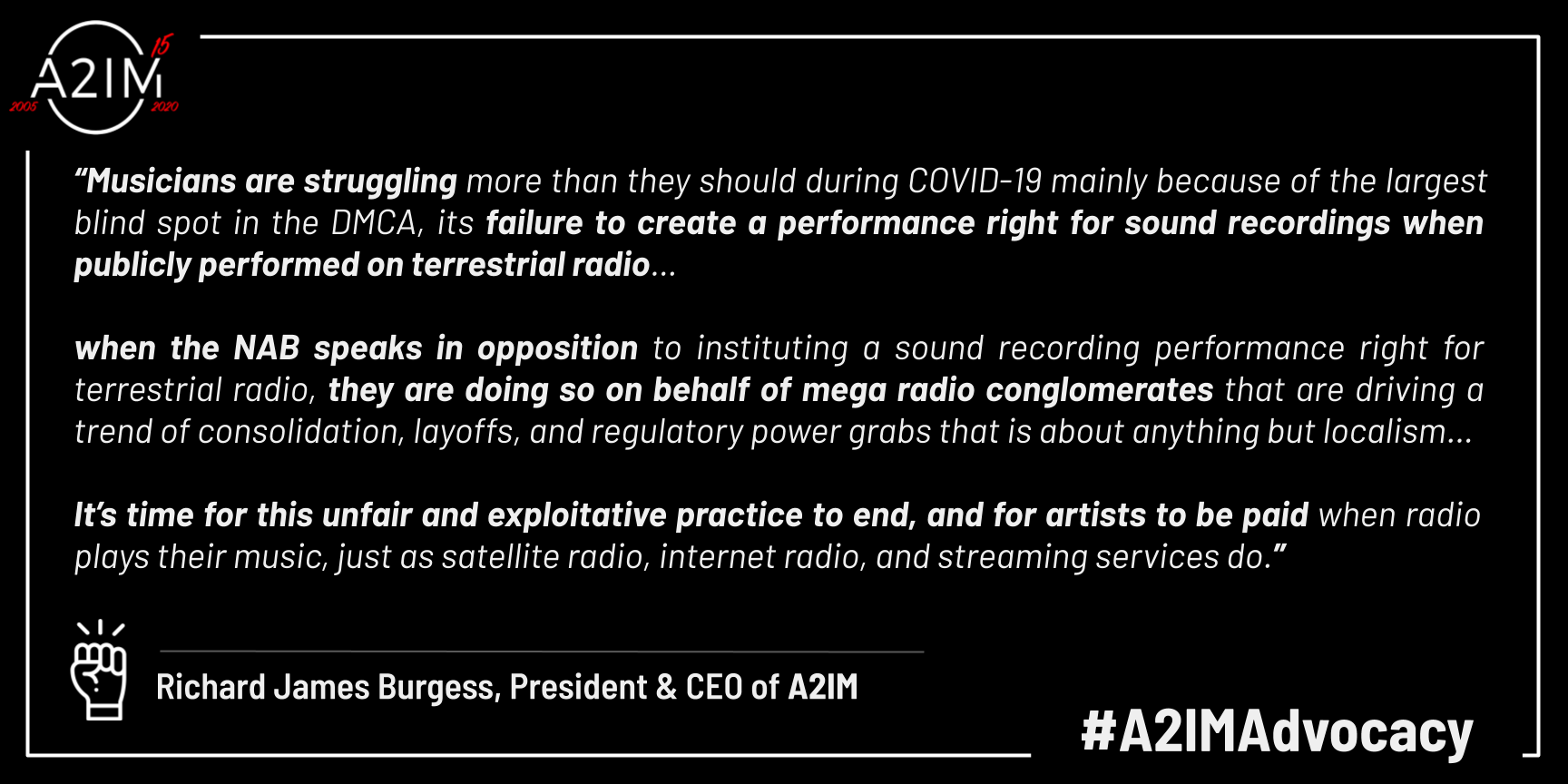 Senate Judiciary Subcommittee Briefing – Scope of Music Rights within the DMCA May 27, 2020

Chairman Tillis, thank you so much for convening this panel discussion today and for offering me this opportunity to share the small and medium sized enterprise perspective of independent record labels and the recording artists they work with regarding the scope of music rights within the Digital Millennium Copyright Act. Thank you also to Ranking Member Coons and all the staff for members of the subcommittee for shedding some light on this crucially important issue to my members.

My name is Dr. Richard James Burgess, and I am the President and CEO of A2IM, the American Association of Independent Music and the voice of independent record labels.

As you know, COVID-19 has placed enormous strain on music creators of every genre, in every state across the country. A2IM represents more than 700 record labels in 33 states, including Merge Records, a small label founded in 1989, and operated since then in Chapel Hill, North Carolina. You may have heard some of their great acts like Durham, North Carolina based Hiss Golden Messenger, or Alejandro Escovedo, a punk rock pioneer and our Independent Icon award winner for this year, who records his music in Hillsborough, NC headquartered, Yep Roc Records.

A2IM members are true small businesses. Of our record label members, more than 140 make less than $1 million a year, and several dozen are sole proprietors.

Musicians are struggling more than they should during COVID-19 mainly because of the largest blind spot in the DMCA, its failure to create a performance right for sound recordings when publicly performed on terrestrial radio.

The DMCA expanded the statutory license created by the Digital Performance in Sound Recordings Act of 1995 so that as a result both interactive and non-subscription, non-interactive digital radio has to pay sound recording copyright owners for the content they use. But terrestrial radio was exempted – given a free pass. Any rationale by which they could justify this in 1998 is completely gone more than twenty years later when there are virtually no physical sales to promote.

But before I dive further into A2IM’s views on the terrestrial performance right, I feel obligated to discuss the DMCA’s safe harbor and notice-and-takedown provisions and how they harm music creators.

The Digital Millennium Copyright Act was a boon to artists and labels alike when it was enacted in 1998. Unfortunately, the systematic abuse of the law makes it necessary for it to be rebalanced to lift the insurmountably one-sided burden that currently falls on music creators and copyright owners.

Designed for a dial up, pre-streaming, pre-social media, and pre-UGC world, the DMCA’s original purpose was to promote a healthier balance in the online music market, to allow nascent digital services to thrive while protecting creators rights, but the safe harbor component of the legislation is not adequate for today’s market realities and it now shields companies who act in bad faith and make profits on the backs of creators. “Safe harbors” have been wrongly manipulated to protect businesses that use unlicensed music to attract visitors and profit off them.

My members lose money every day as a result of piracy, making a fair system of compensation for licensed works all the more important. Negotiations on licensing agreements often turn on two questions: the price the service will pay for music, and the steps they will take to police the rampant piracy. The DMCA safe harbors leave very little room to negotiate on the latter, and as to the former, Congress’s failure to enact a terrestrial sound recording performance right creates an artificial floor of $0 on any market rate negotiation. Attempting to compete with “free” is at the root of the systematic undervaluing of recorded music that has persisted since the Napster era.

In inflation adjusted dollars, music industry revenues hover at around half of what they were in the year 2000. And despite what you may hear from other witnesses today, broadcast radio is incredibly profitable and will remain so for some time to come. According to Nielson, 272 million Americans listen to AM/FM radio each week, and time spent listening to radio is on the rise from 45 minutes a day to 58 minutes a day in the last year, among AM/FM listeners. More than $10 billion of advertising revenue generated by the U.S. terrestrial radio business came from music dominated formats—79% of all revenue in 2018, which is more than the $9.8 billion, was earned that year by the creators and owners of the very same music. I don’t know of another industry that is forced by law to hand over its primary product for zero compensation so that another industry can profit from it. At the most basic level, our copyright system is built on the premise that by creating a property right Congress could live up to its constitutional mandate to promote the progress of science and useful arts. Just two-years ago, with enactment of the Music Modernization Act, Congressional leadership showed that there is room for compromise in decades old music licensing fights. The same should be true with the terrestrial sound recording performance rights issue.

But first, we must accept some stunning trends and basic facts. It is smart politics for the National Association of Broadcasters to talk about localism and their mom and pop members. But the truth is that when the NAB speaks in opposition to instituting a sound recording performance right for terrestrial radio, they are doing so on behalf of mega radio conglomerates that are driving a trend of consolidation, layoffs, and regulatory power grabs that is about anything but localism.

At least 75 nations have a performance right, which means that foreign broadcasters pay royalties to songwriters, composers, and performers. But since there is no equivalent right in the U.S. under certain applicable treaties, foreign performance rights societies are not required or can simply

choose not to distribute these royalties to American recording artists and copyright owners of sound recordings. Low-side estimates suggest that this forces American artists and record labels to leave $70 to $100 million dollars on the table overseas every year.

According to data presented by Inside Radio, the five largest radio conglomerates in the country – iHeartMedia, Cumulus, Townsquare, Entercom and Saga Communications – own more than 1,900 AM/FM stations. And Salem Media Group, the number six station group in the country, where my fellow panelist Scott Hunter works as Vice President and Senior Counsel, owns 109 additional stations and generated more than $250 million in revenue last year.

And, according to several media reports, the largest of these conglomerates could soon be bought by the mega conglomerate that owns or controls SiriusXM, Pandora, Ticketmaster, and Live Nation.

COVID-19 has been hard for everybody, and the present conditions may not be conducive to selling advertising, which is how broadcasters make money, but that will turn around soon. On their last quarterly earnings call, iHeart Media CEO Bob Pittman disclosed that “May bookings are slightly up over April and we see June being better than May.”

It’s critical to look at the shocking trend away from localism when considering the unbalanced bargain that the lack of a terrestrial sound recording performance right represents. We have heard time and again that royalty free radio play is appropriate and not a diminution of recording artists’ intellectual property rights because of the inherent promotional value of airplay. They used to claim that it helped sell records but since the sales of music on a physical medium died, they now talk about promoting live shows and touring acts. Setting aside the painful and obvious truth for artists and music fans that live shows won’t resume any time soon and ignoring the fact that not all artists can tour, it is impossible to justify any claim that national radio mega conglomerates can help promote local shows when programing is beamed in from Los Angeles, New York, or elsewhere.

Consumers simply aren’t turning to AM/FM radio for music discovery as they may have long ago. Consumers learn about new music through personalities they follow on Twitter and Instagram, Pandora and Spotify continue to grow their followings, and large-scale consolidation in the radio industry means that fewer and fewer new artists are breaking through via radio.

In January, long before the economic impact of COVID-19 could be known, iHeart Media laid off somewhere around a thousand local station employees, many of whom were on-air personalities and DJs. This represents a concerted effort to shift away from local programming, homogenize radio play, and cut costs at the expense of jobs. This trend is especially damaging to the regional acts that used to start out locally on the independent labels I represent.

This comes on the heels of intense lobbying by the NAB in 2017 that got the Federal Communications Commission to reverse the main studio rule, which had required local radio stations to actually have an employee on the ground in the markets they serve. And last month, the NAB was at it again, appealing to the FCC to relax the ownership caps that stop radio conglomerates from owning unlimited radio stations in many markets. Overt anti-localism. Eliminating true local radio ownership.

Taxi Productions, Inc., owner of Compton-based KJLH-FM for over 40 years, stated to the FCC in 2019 that “No one has shown that adding a few more stations to a conglomerate mix will make the difference between survival and going out of business for companies constrained by today’s caps, but independent broadcasters like KJLH know that adding those stations could break the backs of small station owners.”

This is the backdrop upon which we ask the subcommittee to consider the terrestrial sound recording performance right. Current law says to recording artists that what they create has no value. We know that the broadcasters demand payment for the content they create when it’s distributed by cable and satellite video distributors, and in fact they won a big fight in Congress last year to further strengthen their hand in negotiations to get paid. What is good for the goose should be good for the gander.

I’m begging this subcommittee to take into account the interests of my small record label members. There have been many legislative attempts (dating back to the 1920s) to create a terrestrial sound recording performance right. The current AM-FM Act, introduced by Senator Blackburn and House Judiciary Committee Chairman Nadler, exempts truly small broadcasters, non-commercial radio stations, and college radio stations.

It’s time for this unfair and exploitative practice to end, and for artists to be paid when radio plays their music, just as satellite radio, internet radio, and streaming services do. That can only happen if Congress makes it so. My members need your help, and we will be a partner in finding a resolution.

Thank you again for the opportunity to testify as a part of this forum, and I would be happy to answer any questions.