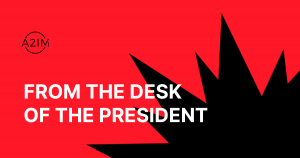 Welcome to From the Desk of the President. This is a series of notes from A2IM CEO and President, Dr. Richard James Burgess. Today, Dr. Burgess bullets A2IM’s advocacy progress and wins.

As you are no doubt aware, A2IM, in addition to the many educational and networking events it hosts, is an advocacy and policy organization. We are active in Washington DC on a daily basis, often through our lobbyist, Josh Hurvitz of NVG but also via direct interactions with issues and lawmakers and through collaborations and coalitions with organizations that share our interests. These shared interests can, in some cases, be specific to single issues. That is why you may see A2IM collaborating with entities that would appear to have competing interests. In the past year, we have also had to take action in states—to defend freelance status in California (AB5) and to create transparency for police misconduct in New York (50-A repeal).

Getting things done via the legislature can be a long, drawn-out, messy process or a quick opportunistic hit. We are often on the defensive but are always positioning ourselves for proactive positions. Outright wins are not easy to come by but we, and your businesses would sustain a great deal more tangible losses if we did not maintain a consistent presence in lawmakers minds and offices (virtually at the moment but in person usually). When changes in the law are being considered A2IM makes sure that the interests of its small and medium-sized-enterprise members are taken into account.

The primary goal of A2IM from its beginning, in 2005, was to ensure a level playing field for independents. Before we fully entered the digital era, the potential inequities were relatively easy to comprehend, like the business models of the time. Now we are dealing with constantly proliferating business models whose long-term impacts on your businesses can be difficult to predict. Understanding how they can affect your revenues can be a complicated game of 360-degree chess.

We look forward to getting back to our in-person events, which in so many ways are the lifeblood of A2IM. We will continue our events virtually until it is safe to gather again. Please know that our efforts to protect and improve the legislative environment in which your businesses exist, continue every day. Advocacy and policy may be a relatively unseen activity and it may be the most important thing we do for our members. It is time-consuming and expensive, and we greatly appreciate that you choose to support these activities by being members.

A Brief Summary of A2IM Advocacy 2020