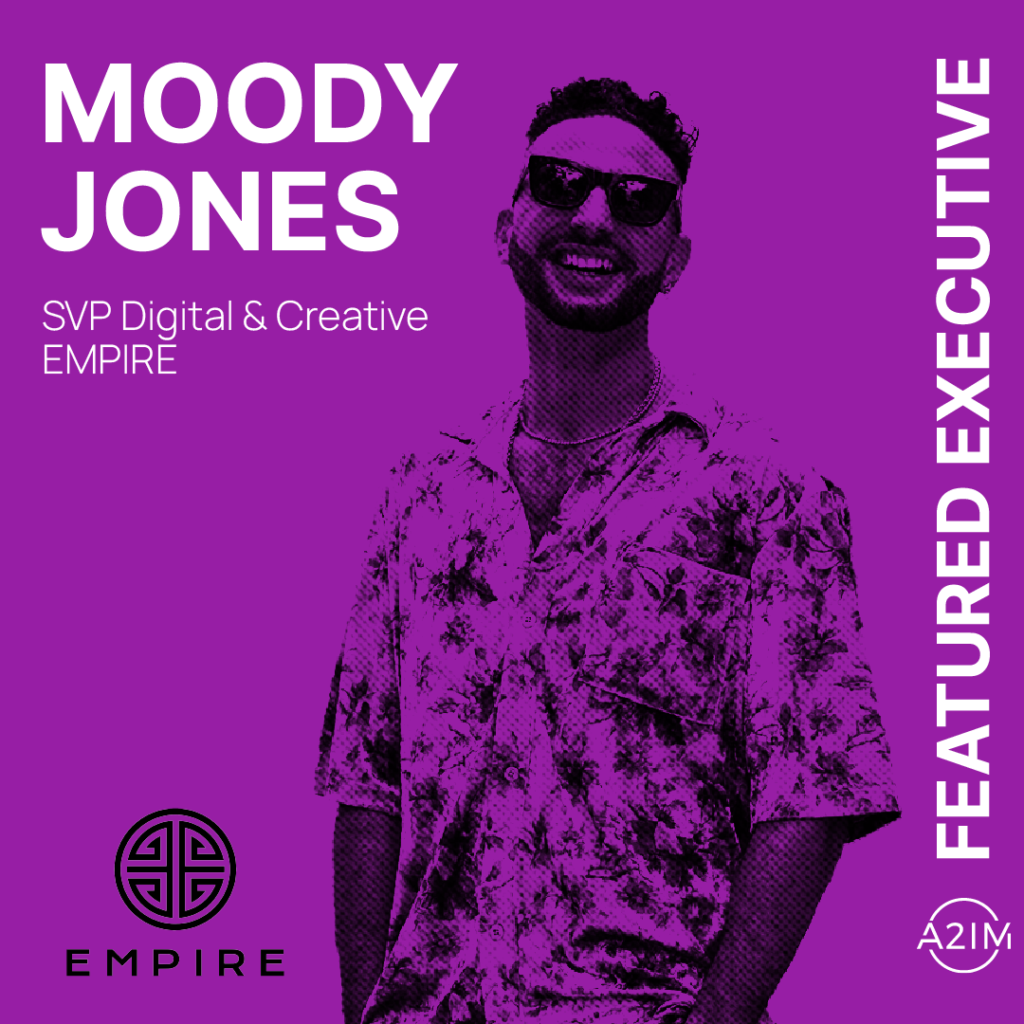 Joining EMPIRE as Director of Digital – the company’s first Digital hire – Moody Jones rose in the ranks to VP and now SVP, building out the department and improving processes along the way.

Now SVP of Digital and Creative, Moody also owns a clothing line and makes his own music.

How did Moody get his start in the music industry, and how it lead to the work he does today?

Throughout the span of two bachelor degrees (Industrial Engineering & Marketing), Moody produced events in Montreal with the objective of linking international artists with local talent to help everybody know about their neighborhood stars.

During the day, he also did digital marketing in the adult space. A few years later he and a colleague quit their job, started an HR company and joined an accelerator program called “Real Ventures“. At the end of the program, their investor bought them out and encouraged Moody to combine his music experience and digital marketing at join Wavo and help them pivot from a remix competition platform to an agency.

Moody helped scale the company from $500 to $500K in monthly revenue before starting his own consulting firm Everybody Knows. Everybody Knows spearheaded digital campaigns for Brent Faiyaz, Saint JHN, JLO, and EMPIRE’s Tyga, which helped form his relationship with the senior team at the label.

Before achieving SVP stripes, Moody was actually the first digital hire for EMPIRE. Since then, he’s risen up the ranks from Director and VP and ultimately SVP and along the way he has built out the Creative, Digital and Design departments.

Initially coming on as a digital marketer, in order for him to scale his department, he ended up creating company-wide processes in order for managers to better manage their resources and team members and built a project management system. In turn, Moody was, and is still a part, of the team that has helped EMPIRE grow to become one of the largest independent music companies that exists.

Is there a success story or milestone that stands out in Moody’s career?

A career milestone for Moody has been the recent release of Aaliyah’s music to streaming services, which was a long time coming. This was a major move for EMPIRE, culture in general, and a way for Aaliyah’s current fans to experience her music in new ways, as well as bring it to younger generations. Moody works on all the creative and digital rollout for that project – which is still ongoing.

What else does Moody get up to outside of work?

Having wanted to service his artists better (& because he has a good ear) Moody has been putting out his own records and has millions of streams to date. He is a strong advocate for mental health, wellbeing, and mindset. Having been born in Cairo and Raised in Saudi Arabia, he recently started a clothing line – YDOOM.com / Unisex garments made from burkas to help take fabric that is forced on women to hide their beauty and allowing all genders the freedom of expression.