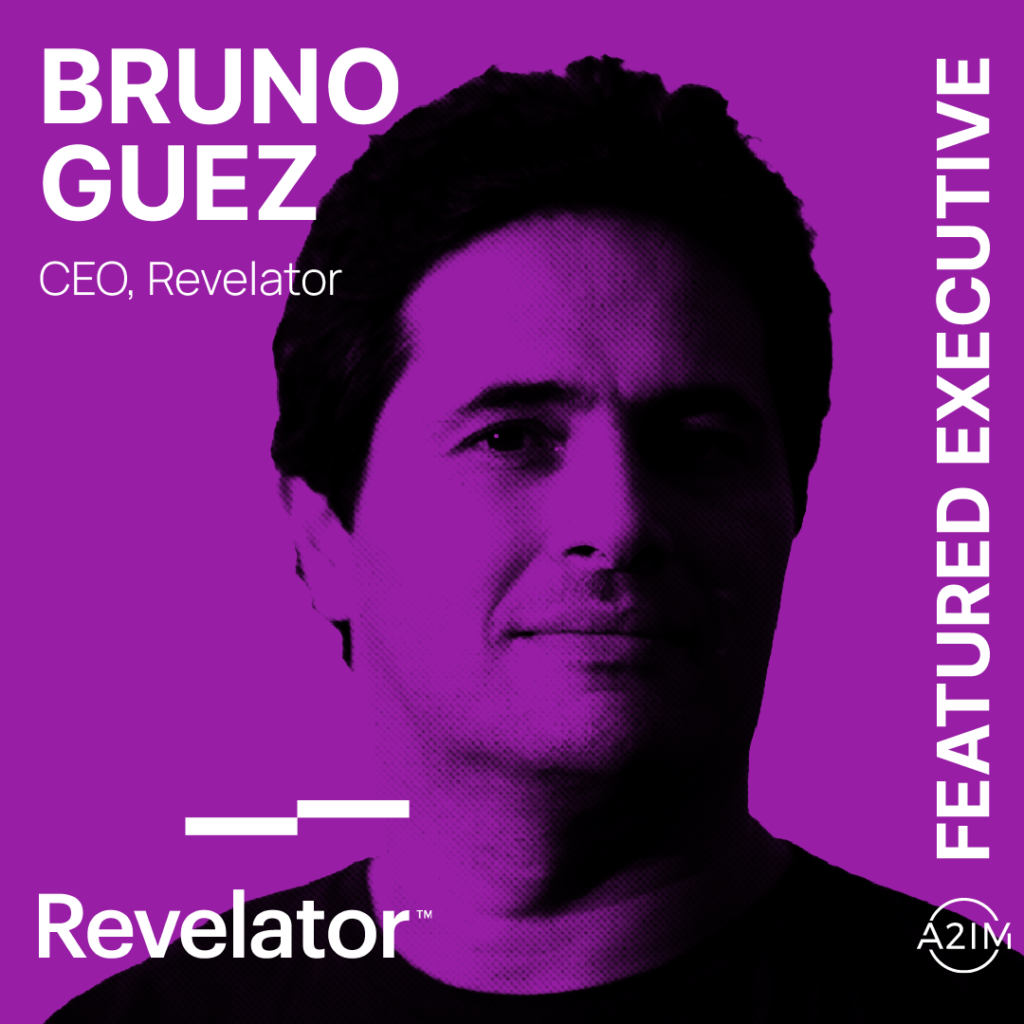 Founder of Revelator, and a former Director on the Board of Merlin Network, the leading music rights agency, Bruno Guez brings over twenty-five years of experience as a seasoned digital music executive working with Chris Blackwell’ Island Records and Guy Laliberte’s Cirque du Soleil.

With a strong vision to retool the creative industry, Bruno saw the opportunity to provide a game-changing technology platform for global rights administration and royalty management using blockchain technology, with a goal of enabling efficient and fully transparent reporting, real-time payments and innovative revenue streams for rights owners, creators, artists, producers, and publishers around the world.

I am most excited about breaking the barriers on royalty payments for artists. I want to provide meaningful change in the way creators monetize their work and get paid.

How did you get your start in the music industry, and how it lead to the work you do today?

I studied Ethnomusicology at UCLA and started my music business career in Los Angeles in 1993, after founding the record label, Quango Music Group. Through Quango, I quickly made my name as DJ, producer and tastemaker releasing the mixtapes that were the output of my DJing on LA’s seminal radio station KCRW and a slew of underground clubs such as BossaNova and Ponana Souk. My mixes caught the ear of legendary industry executive and Island Records founder Chris Blackwell, and soon after Quango became a subsidiary of Blackwell’s Island Records, later moving to Blackwell’s venture Palm Pictures.

Through Island Records, Quango released early music from the likes of Tricky, Sneaker Pimps, Basement Jaxx, Kruder and Dorfmeister and Talvin Singh amongst many others. Alongside the label, I created and curated the musical experience at Blackwell’s Island Outpost Hotels, with custom experiences for each property. Over the last 20 years, my work in branding and music identity helped define other brands and retail experiences, including luxury eyewear company Oliver Peoples, the Standard Hotel and American Rag.

Due to the complicated nature of music business administration, I had to deal with metadata issues early on, managing publishing, licensing agreements and royalty distributions through systems I built in the 1990s. Eventually I migrated to the cloud and turned software into a fully customized label management solution with the ability to relate tracks, songs, and albums to writer, publisher and performer royalty information.

This was the prototype for Revelator. The migration to digital, and consequently applying automated processes to dealing with the mechanics of running a digital music business, and streamlining the exponential increase in the amount of data associated with all these new channels and devices would become the next focus of my career. In between 2001-2004 I continued releasing music on Quango, signing and developing breakthrough artists Zero 7 and Bitter:Sweet, and finding success in licensing music for film, television, and advertising. I also served as Creative Music Director for Guy Laliberte’s Cirque du Soleil, crafting the soundtracks of the live entertainment shows.

After over 20 years in Los Angeles, I moved to Israel to pursue the next chapter of my life closer to family. While still managing the operations of my record label, I realized the metadata management and reporting solutions I had created were no longer enough to provide the core services labels provide artists. If I wanted to continue running a digital music business, I needed to build a sales and marketing solution that was as easy to use as modern web or mobile applications have become – integrated, sophisticated, and managed. It was time for Revelator to be born.

With all of the years of music and technology experience behind me, I saw a clear opportunity to build a better music industry. By the summer of 2012, I began building the foundation of Revelator – a cloud-based data management & rights administration platform for digital business. Since that moment in 2012, I assembled a talented team of the best software developers, product designers, creative professionals, investors and music industry experts to orchestrate my vision of re-engineering the digital music industry.

Is there a success story or career milestone that you are most proud of?

Not many people get to say their career derives from their passion; for me, I am most proud that I’ve been able to make my life’s career based around my passion for music, and find success while doing so.

Outside of your work in music, do you have any other hobbies/ particular areas of expertise/interest etc.?

I enjoy making music, eating good food, and staring at the sun.

My mission with Revelator is to bring greater transparency, simplicity and efficiency to the way artists, managers, record labels, music publishers and rights organizations manage their businesses in today’s fragmented digital landscape. With the industry starting to shift toward Web3 business models, the market dynamics are right for Revelator to accelerate the growth of the independent creative class in the intellectual property rights value chain, and enable artists and creators to realize their dream of making a sustainable career out of their talent.

I am most excited about breaking the barriers on royalty payments for artists. I want to provide meaningful change in the way creators monetize their work and get paid.