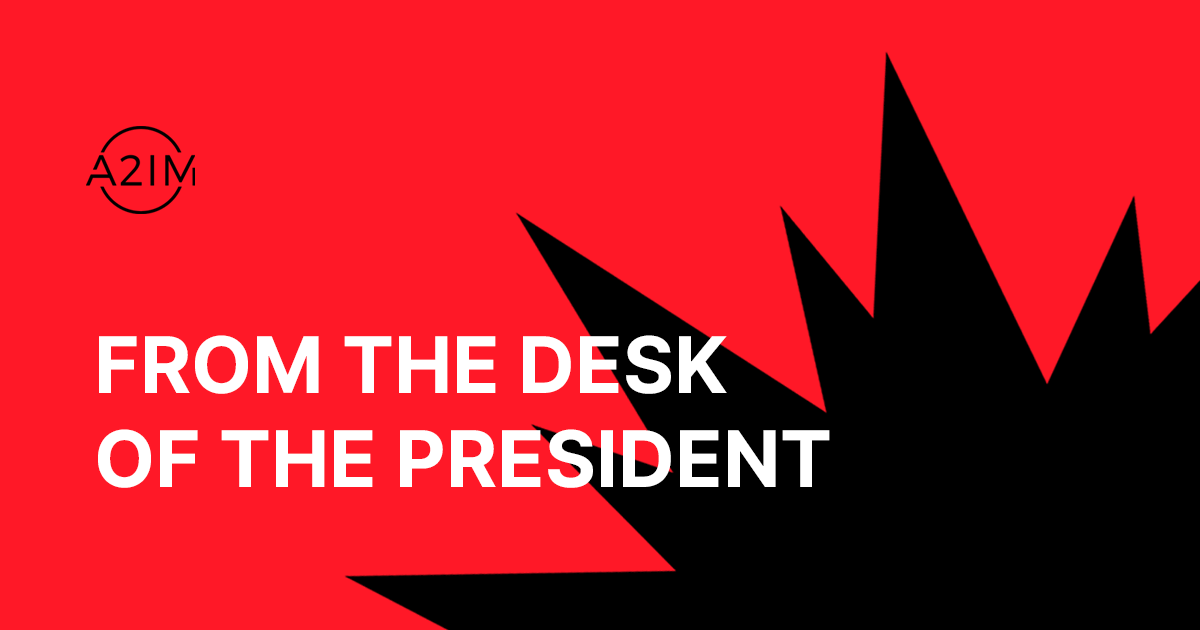 Welcome to From the Desk of the President, a series of notes from A2IM CEO and President, Dr. Richard James Burgess. Today, A2IM  together with a group of 119 leaders from the independent music industry in 19 states sent a letter to Senate Majority Leader Charles Schumer (D-NY) and Speaker of the House Nancy Pelosi (D-CA) urging that a modest relief provision (HITS) for the creation of recorded music must be included in the Coronavirus Rescue Legislation that Congress is debating.

In short, the Help Independent Tracks Succeed (HITS) legislation would grant the same tax treatment to sound recording production costs that is currently afforded to other arts productions including live theater, television and motion pictures. Unlike many other relief proposals that entail direct federal spending to support ailing industries, the HITS Act simply speeds up music creators’ ability to deduct the first $150,000 of sound recording production costs from their taxable income.

I want to thank all of you who “signed” our letter to Speaker Pelosi and Leader Schumer in support of our HITS Act legislation. Thank you also to Rosie Lopez, President of Tommy Boy, Ghazi, CEO of EMPIRE, and Allen Kovac, CEO, of Better Noise for your quotes that we included in the press release that went out this morning. We very much appreciate the Recording Academy’s support on this issue as well.

As you may be aware, the HITS Act would align the recorded music industry with film and theater businesses in allowing you to write off production costs in the year that they are incurred (in our case, up to $150,000). As you know, those costs currently have to be amortized over several years, tying up otherwise useful capital.

We tried to get this language in the Consolidated Appropriations Act at the end of last year and it didn’t make it for trivial reasons. Getting new legislation is never a straightforward process. The rush to get the HITS Act letter and PR done this week was because the ongoing “reconciliation” offers an opportunity to get this bill passed before April 15th so that you could use the deduction for the 2020 tax year.

Should it not be included in the reconciliation, we will not give up – we will look for the next opportunity for inclusion.

As always, this was a team effort and I thank the team for pulling together so magnificently to get it done. Josh Hurvitz, our DC advocate worked tirelessly over many months to make this happen, much of his effort hidden from view with all the behind-the-scenes conversations that had to happen. Alyssa pulled together the well-over one-hundred signers in record time. We couldn’t have done this without your rapid-fire responses. More than 50 companies, impressively, signed on in just the overnight period following Alyssa’s initial 10pm email.

Below is the letter to Speaker Pelosi and Leader Schumer with your supporting company names.  Also attached is the press release that went out this morning:

Today, American Association of Independent Music (A2IM) President and CEO Dr. Richard James Burgess and a group of 118 leaders from the independent music industry in 19 states sent a letter to Senate Majority Leader Charles Schumer (D-NY) and Speaker of the House Nancy Pelosi (D-CA) urging that a modest relief provision for the creation of recorded music must be included in the Coronavirus Rescue Legislation that Congress is debating.

A2IM has over 600 record label members in over 30 states, and independent music represents over 30% of the U.S. market for recorded music. When President Biden released his American Rescue Plan in January, he observed that among American small businesses, the arts have “suffered disproportionately.”

“Musicians generally manage to cobble together a livable income only by combining live performances with the release of recorded music. With half of their income stream dormant for the foreseeable future, and elected officials frequently pointing to the power of music as a positive force to uplift people in tough times, we sincerely hope that we won’t get left behind,” said Burgess.

“The American Rescue Plan already includes important tax credits to support working class families and recognizes the economic importance of small businesses, especially in black and brown communities. The HITS Act is a natural extension that recognizes the way our industry partners with artists by financing their projects,” said Rosie Lopez, President at Tommy Boy Records.

“The pandemic has completely changed how we think about releasing music, without the benefit of live performance and touring to promote new projects. The HITS Act would free up independent labels to invest more money now in new music,” said Ghazi, CEO/Founder at EMPIRE.

Unlike many other relief proposals that entail direct federal spending to support ailing industries, the HITS Act simply speeds up music creators’ ability to deduct the first $150,000 of sound recording production costs from their taxable income. Because of advances in technology, many artists record and even release their own music today, and the benefit would extend not only to businesses but also to individuals.

When Congress passed COVID-19 relief legislation in December, federal dollars were directed to support live music venues, and small business loan restrictions were relaxed so that more of the largest radio broadcasters could receive forgivable loans. But since the beginning of the pandemic, nothing has been done to support the creation of music.

“The music ecosystem begins with the creation of the art,” said Allen Kovac, Chief Executive Officer at Better Noise. “If policymakers are serious in their support for the arts, they would make sure that artists themselves continue to have avenues to tell their stories, and that’s what the HITS Act is all about.”

Speaker of the House

Last month, when President Biden released the American Rescue Plan, we were thankful and relieved to see his recognition that among small businesses, those in the arts have suffered disproportionately during the COVID-19 pandemic. As leaders of many of the independent record labels that make up the over 700 members of the American Association of Independent Music, we write to urge that as Congress translates the plan into a legislative package, it must act to help musicians to get back to work recording music.

Traditionally, musicians and recording artists can only cobble together an income to support their families by combining money earned touring and performing live with earnings from recording and releasing music. With one of those revenue streams shut off, the ability to record and release music is the only thing keeping many musicians afloat, and for many the availability of capital to launch a new project that may or may not be a commercial success is a significant barrier. But luckily Congress could easily fix this situation. Therefore, we ask that the next relief package include provisions included in the HITS Act, which was introduced last year by Sens. Feinstein (D-CA) and Blackburn (R-TN) and Reps. Sanchez (D-CA) and Estes (R-KS).

The HITS Act would allow recording artists and their record label partners to immediately expense the cost of most indie projects, rather than having to spread out the tax benefit over time. 2020 was a tumultuous year for recorded music, with normal release schedules – often tied to touring, summer festivals and other live performances – completely upended. Enactment of the HITS Act would allow for us to take on more projects, in a COVID-responsible manner, because the tax savings this year would be reinvested in new projects.

The HITS Act is also a matter of fairness across the arts sector, especially artists of color who have been disproportionately affected by the pandemic and lack generational wealth that gives them access to capital. Film, television and live theater production costs already enjoy this tax benefit. Congress has also already acted to target relief to other parts of the music ecosystem including live music venues and mega conglomerate radio stations. Because the benefit in the HITS Act is related to timing, its overall federal budgetary impact is de minimus. This is a reasonable, bipartisan and fiscally responsible measure that represents a needed lifeline for our suffering industry.

Thank you for considering our plea for help. 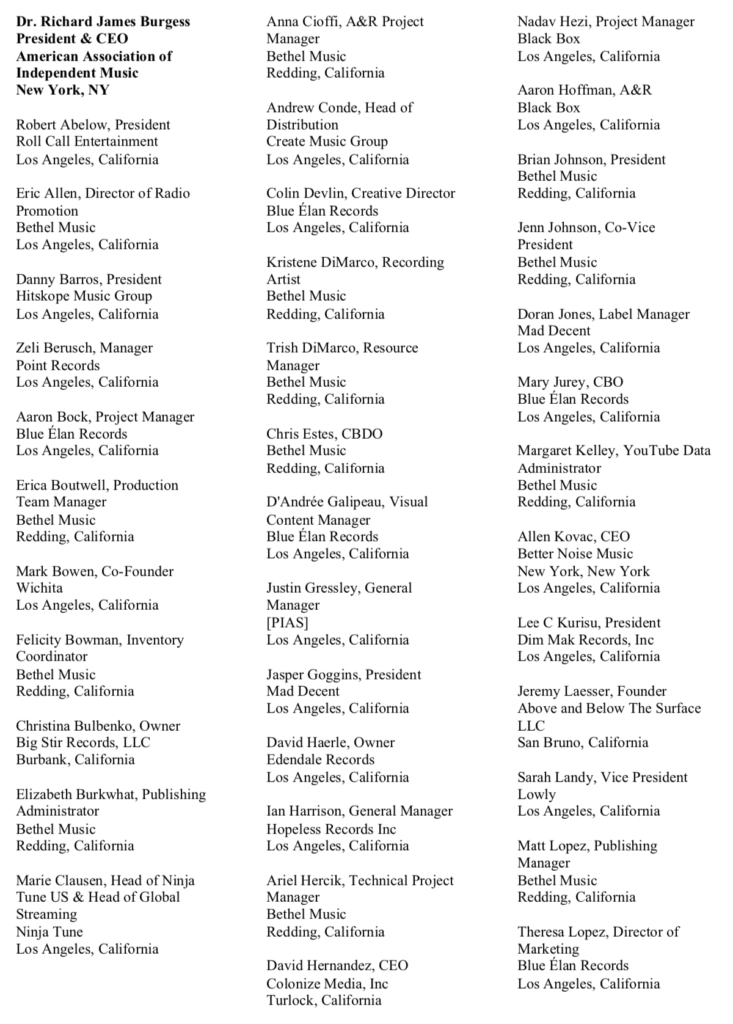 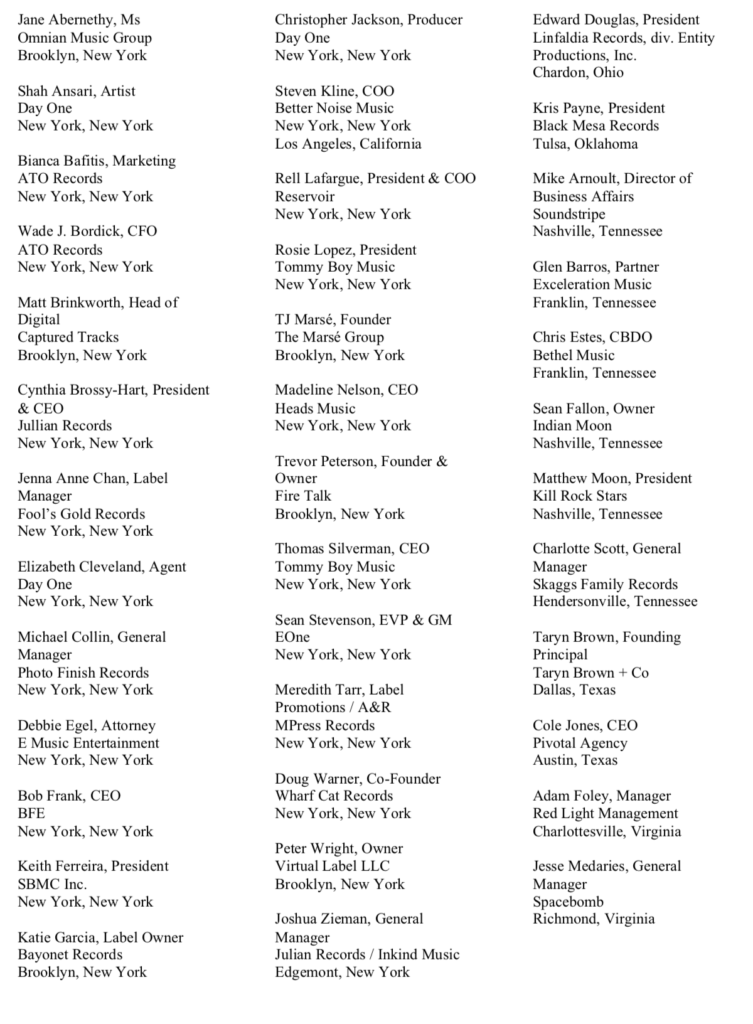 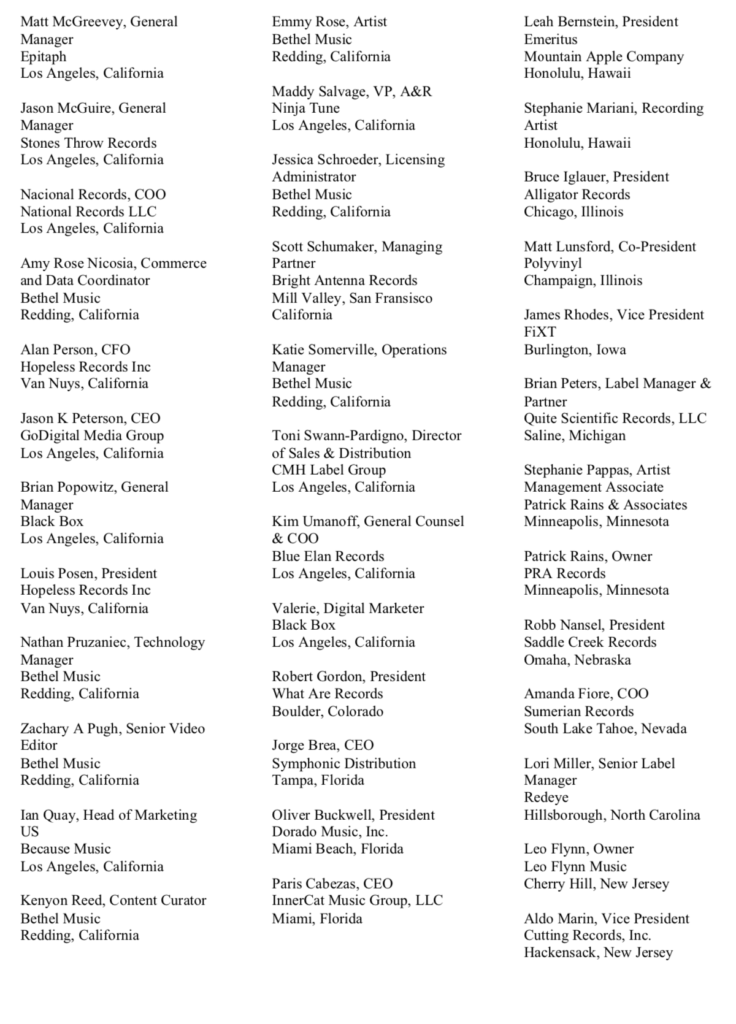 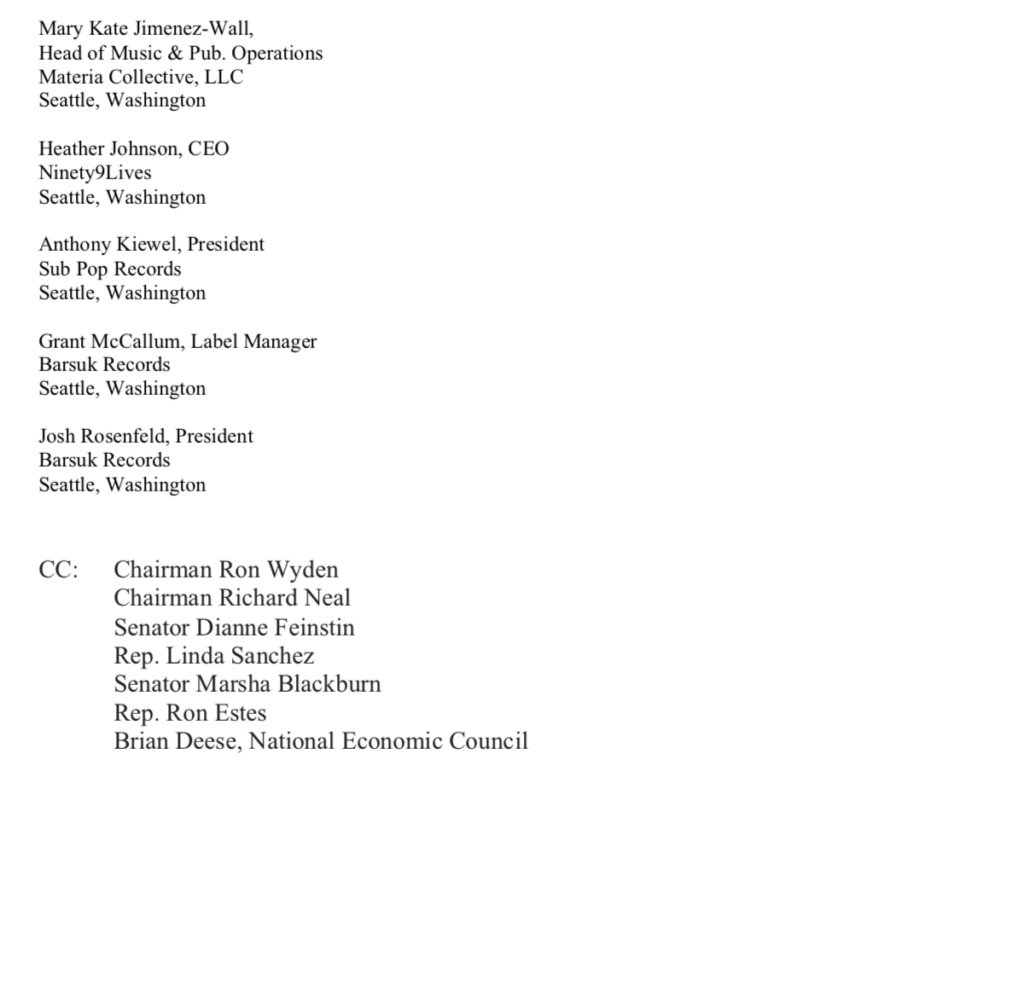 Learn more about A2IM here, and contact our team at [email protected] to join now.